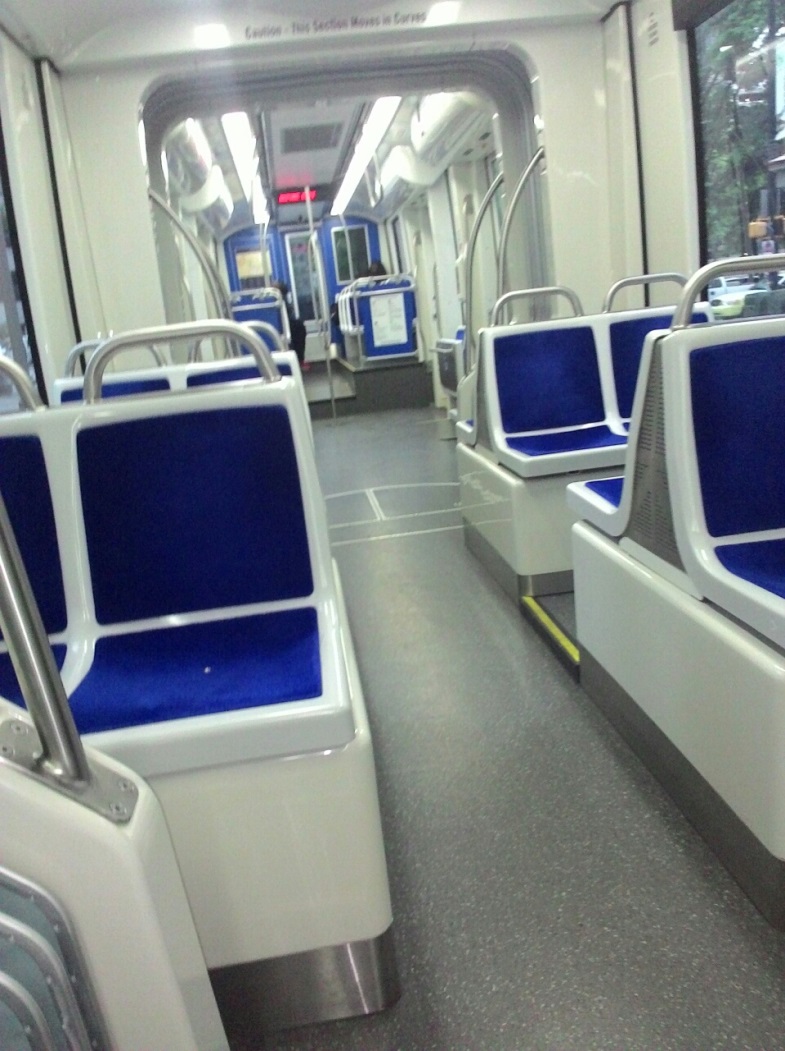 A couple of Streetcar patrons catching some ZZZZZ’s.

Riding the Streetcar has been on my to-do list since its debut. And since they announced free rides for the rest of the year, I decided I would take advantage of the opportunity.

On Tuesday morning, I stopped talking about it and said today is the day I ride the Atlanta Streetcar. However, I also needed to cook my pork chops that I bought on sale at the Edgewood Kroger.

With time being my disadvantage, as she always is, I decided to accept her challenge and configure the ultimate multi-task. I figured at most it would take me an hour to walk to the Streetcar, ride it around once and get back to my humble abode on Decatur Street.

With this in mind, I salted and peppered my chops, put them on low, and set out for the Streetcar.

I started walking the two blocks to the Edgewood on Hilliard stop in front of a couple of empty but potentially great store fronts next to Harolds Chicken and Ice Bar. I was half a block away when I saw it approaching the stop. I thought I would miss it for sure. Lady luck be with me! I picked up the pace in time to hop on with no wait.

I found a seat on the left next to a man who appeared to be asleep. Hard sleep. The time was 8:52 a.m.

The first thing I realized once I was on the train is that the Streetcar goes in one direction only. Like a race track. Since I got on at Edgewood at Hilliard, I have to go around the entire track before we get to the Sweet Auburn Market stop. I tucked that away in my memory for future use.

The Streetcar carried me two blocks down Edgewood passing a number of restaurants, art galleries, businesses like Noni’s and Joystick Game Bar. The lots are owned by holdings companies and other LLC’s.

A quick peak at Realist.com reveals that most of these buildings were originally built between 1910 and 1930. Total assessments range from $110,800 to $566,100. Many of the sales of these properties occurred prior to 2012. With that in mind, many of these properties saw market value decreases from 2012 to 2013, and those values maintained throughout 2014. There have not been many sales in the past 6 months; however, my guess is that commercial leases continue to increase. In fact, one local restaurant owner was reported to have bought the building in 2012 due to rising rental rates in the area.

A prompt left onto Jackson Street (or what I like to call Church row) revealed to King Historic District stop. This is where you can tour Ebenezer Baptist Church, the 124-year-old church and where Dr. Martin Luther King preached his ministry of non-violence during the civil rights movement. This is also where one would find The King Center and the home of the beloved civil rights leader.

From here I sort of zoned out through the Dobbs Plaza and Auburn and Piedmont stops. Four students shuffled on and off there, and that was honestly the most traffic that I saw the whole time. We passed another church, run down buildings and some renovated buildings with new shops.

Through the Streetcar windows, it was all hustle and bustle on the sidewalks at the Woodruff Park stop. If it weren’t for my pork chops waiting for me at home, I would have hopped off to take a stroll through the park with the pretty yellow flowers in bloom.

While gazing at the gorgeous greenery, the sleeping man next to me fell out of his seat. Without disturbing his slumber, I moved to a more central seating arrangement on the car.

The stretch along the Peachtree Center and Carnegie at Peachtree stops provided some great people-watching while passing between high rises and large city buildings. You can’t help but notice the presence of nationally recognizable corporate businesses and Georgia State University buildings.

There was an unexpected 11-minute stop at the Centennial Olympic Park stop. They announced it once the car stopped. People got on and then immediately hopped back off upon realizing that they could walk to the next stop in less time. This stop is right in front of the giant ferris wheel downtown. I watched as people entered and exited the Waffle House and strolled through the park. Just before the Streetcar doors closed, about five homeless patrons boarded to enjoy the ride. One in particular was having a delightful conversation with himself. A tourist family of five walked up as if considering boarding, but apparently it wasn’t in the cards for them.

From here, we passed the uneventful Lucky at Cone stop and on to the Park Place stop which is on the opposite side of Woodruff Park. So many people walking around reminded me of the quiet nature of the Streetcar. This made me grateful for the “Stop and Look” pedestrian signage. I tucked that away for future pedestrian data I might need.

Just as my stomach started rumbling, I was back where I’d started at the Edgewood at Hilliard stop. My stop. I got up, bid farewell to the motley Streetcar cast, and exited. It was 9:38 a.m.

Not bad. It took 46 minutes. I thought about the this experience as I walked two blocks back home. Here is what I learned:

David Benoit’s, Free Streetcar…Yay… is right, for now, but possibly shortsighted. I rode the Streetcar twice. That’s it. Both times it was before noon. From those two experiences, I can say, no one is riding the Streetcar. At least not those for whom it was designed. However, being an optimist, I see the potential.

Sometimes a good idea just needs to be reconfigured to be successful. It’s good, but it’s not quite there yet—as if there is a missing piece that would help it make sense for the average citizen. Wasn’t it supposed to connect to the Beltline? Is this just the first piece of a bigger picture that I don’t see? Or is the Streetcar supposed to be for tourists and not so much for Atlantans?

Maybe it’s like Field of Dreams. If you build it, they will come. Right now we may not know who that will be, and people might think you are crazy, but eventually it will come.

Candace Garcia rides a pink bike, is a Realtor at The Intown Collection and is a proponent of progressive city planning and development.