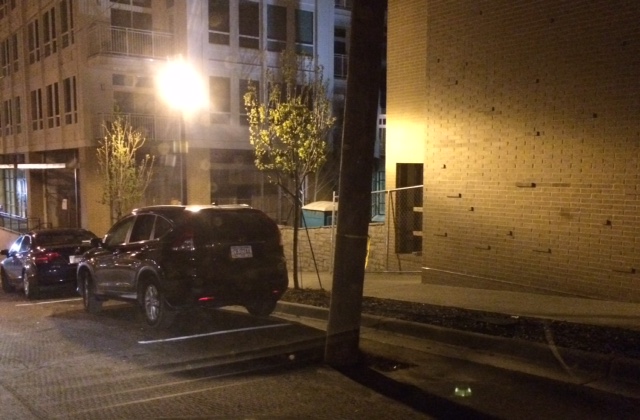 Recently, Los Angeles has just settled to the tune of $1.4 billion (with a “B”) dollars to fix the city’s sidewalks. I have to ask: is this precedence? If it is judicial precedent, Atlanta had better be ready to pony a little more of that infrastructure bond money to sidewalks as an act of good faith. But wait, Dogshit recently reported that the State of Georgia set aside $1 billion (with a “B”) to fix the roads in the state, and added “but don’t go looking for new rail lines.” Why shouldn’t we look for rail lines? Oh, that’s right, ‘Merican’s drive, gosh darnit! But the fact is, Atlanta can’t even get driving right. Case in point:

The City of Atlanta can’t even get developers to build parking spaces without sticking a utility pole in the middle of it. And the utility pole phenomenon isn’t some “desperately needed infrastructure problem that has plagued our City for years,” this parking space was altered in the last two weeks. Who are we? Canadians?

As far as sidewalks go, I could dazzle you with more pictures of random obstructions hindering pedestrian movement and asking for a lawsuit to happen. Or you could just Google “Atlanta sidewalks,” like I did and you’ll find a wonderful assortment of pedestrian impediments. The fact is, the City of Atlanta has already been sued by the United States Department of Justice once for non-compliance with the American with Disabilities Act. Will the City have to incur another lawsuit just to provide people with the basic necessities that local municipalities are obligated to provide? After all, those of us who walk pay taxes too.