All this recent talk of reviving the TSPLOST got me thinking. How do we travel in Atlanta? Obviously, the grandiose answer is: the car. Our peer cities chastise us for driving too much—perhaps rightly so—but are they waving a finger at us to keep it from being waved at them?

As to our “peer cities,” I’m not talking about New York City or Los Angeles. They’re much bigger cities with regard to population and with far more dynamic economies than Atlanta’s. Instead, I chose three quite different cities to compare in terms of Atlanta’s driving habits:

The United States aggregate sets the baseline as an average. It’s not surprising that over a third of people drive to work in this country. Considering that national policy has done nothing but subsidize unsustainable growth based upon the proliferation of the automobile, U.S. citizens probably aren’t driving as much as they could be. What is interesting is that Hispanics and Asians don’t drive as much as whites and blacks. I assume that, per capita, car ownership is comparable.

Surprisingly, Atlanta is below the national average across the board. Perhaps MARTA is a valuable asset that should be expanded as a sustainable option for a city increasingly growing in density. However, it is odd that 20 percent of the Asian population walks to work. 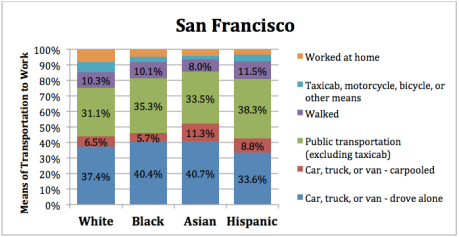 Significant portions of San Francisco residents utilize mass transit to get to work in the morning. I also assume these numbers include the Google buses that are so vehemently hated for chauffeuring millionaires to their jobs by using public, Muni bus stops as pick-up locations. Regardless of the politics of mass transit, San Fran has been the only city whose white population drives less than its black population. The hypothesis that the suburbs are becoming the ghettos of the future may perhaps be demonstrated in this simple little statistic.

Seattle is pretty comparable to Atlanta with the exception of its population demographics. All in all, they do utilize mass transit more so than Atlantans, even if it’s only bus transit. I assume this is because transit ridership isn’t linked to the stigma of poverty as riding MARTA is in Atlanta. My prediction is that by 2030 Atlanta will have similar numbers to Seattle due to BeltLine completion and streetcar expansion.

Charlotte is Atlanta’s arch-nemesis for southern economic growth. They want to be Atlanta so bad it hurts them right to the tip of their single pathetic skyscraper. They boast about the new streetcar that runs through their five-block downtown, but it hasn’t delivered as promised (not to say that ours will either). And, above all else, they are nearing completion of a perimeter interstate similar to ours. Apparently they haven’t learned from our mistakes of cul-de-sacs and a built environment that fosters detachment from other people—and therefore reality.

With gasoline prices falling quickly and OPEC not cutting back on supply, I don’t know what the future holds for increased density in Atlanta or the continued advocacy for alternative modes of transportation. What I do know is that the car is a burden on the middle and working class of the every city. A significant amount of general fund revenue for municipalities is subsidized by vehicle taxation. So, if you need to cut spending and don’t want to subsidize the government, move closer to a MARTA station.