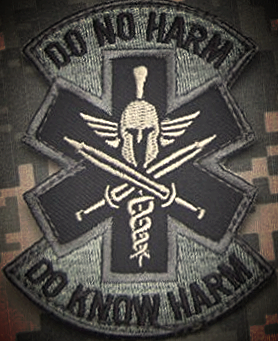 He shifted in his seat and didn’t answer the question. After all, my asking it as the first question was probably the wrong way to start an interview with my best friend since childhood. “Am I willing?” he asked. “Yeah, I’m willing to go back to war. Duty is instilled in my heart. Believe it or not, I feel very deeply for America and would without a doubt go back to war, but I won’t fight. I’m a medic and I hate guns.” From our countless disagreements about Iraq and war he knows that he needs to have this answer make sense for my sake more than any others’. The explanation of willingness is, after all, his foundation.However, it doesn’t change the fact that what he describes as willingness is ultimately a paradox.

“I feel that as a medic, my work [in Iraq] would prove very influential to the Iraqis.  They don’t have good medicine.  Unfortunately I need the guns to support my effort because Iraqis understand violence very well.” He and I have argued about the war since he joined the Army eight years ago, six of those years in active duty. During his late 20s, he needed to straighten his life out, and at age 30 he was running out of options. The Army simply made sense to him, though he never uttered a word of desire to join the military throughout our entire childhood.

The United States is dabbling in what the news and congressional opponents of the war refer to as “mission creep”—the slow implementation of resources in Iraq which would, sooner or later, result in full-on combat. My best friend got the call a week ago that he is to report to Ft. Hood in July for “training,” or at least that’s how he explains it. Until then, he puts his life on hold. No long term plans. No serious relationship with a woman, unless someone wants his or her heart broken. I personally am getting ready for my friend’s deployment and for him to spend a third year of his life in the desert.

“I fully believe we have a country worth fighting for.”

“Is Iraq a country worth fight for?” I ask, instigating our usual argument.

“Yes, because [Iraq’s] problems eventually turn into ours, even if we try to avoid it.” Most of my instigation, and his to me, is done just to enter into an argument for our own enjoyment, but to the chagrin of others who may be around as witnesses. My wife tells me that she has never heard such hateful things spoken between two people, but she doesn’t understand what we are going after. I don’t think anyone really does. To be honest, in our arguments, the goal is for the other to say, “You’re right.” Only then can the one that is “right” jump up and shame the other with the confidence of a victor.

I can only assume the Iraqi problems my friend is referring to concern the Islamic State, which, as an entity, is something I truly don’t understand. With my feet always planted firm on US soild,  for the first time in my life I’m speechless in articulating any arm-chair liberal notions that may saved my ass in an argument before. With ISIS, I have no idea what I’m talking about. How evil is evil? What is evil? I was not around for the Nazis, and everything Reagan said about the Russians being an evil empire, within time, proved false (current foreign policy misadventures aside).

“Why are you a medic?” I ask as a basic question, and expecting a basic answer.

“One evening during a late night mission in Iraq the vehicle that I had been [assigned to] lowered its ramp and three men, with their hands wrapped in thick plastic zip-ties and face covered, approached.  This is when I began to notice real humility in a human being.

Before the first detainee stepped insidethe vehicle, his foot hit the lip of the ramp, and his entire body fell as one complete [thud]. His body totally ignored the natural tendencies to recoil and avoid an unpleasant and very painful experience.  Maybe it was because two of his senses had been temporarily disabled.  I picked up the detainee and sat him on the bench.  The other two followed behind.

I was now alone guarding three Iraqis inside the back of a dark 6 x 10 x 9-foot moving metal box.  An intense feeling of fear surged within me and for a moment my mind escaped reality. For the first time I felt powerless because this was an experience I had never dealt with before. The moaning of one man helped me to quickly regain my thoughts and I found myself looking at the three dark silhouettes of the men sitting opposite me, and imagined what it would be like to be a prisoner of war.

With my flashlight, I noticed all three men were trembling, and when I placed my hand on one man’s shoulder to check if he was confined well enough; he cowered. I actually felt bad for them. I put myself in their shoes and pictured myself as a prisoner and how I would like to be treated. Because I did that it helped me to treat them with kindness, as a human being.

When you expose a human to an environment of fear and impair their senses, they are left in such a vulnerable state of mind that their actions become humiliating. But it’s only humiliating to the capturer. I looked upon the captive as human and empathize their current dilemma. That evening as well as the many others helped me to put aside my own feelings for the sake of another regardless of their nationality.”

Four years have passed since my friend completed his second tour in the Iraq War. My friend, the Sergeant, went from baking school to signing up for the Army right afterward. He wanted more from his life, regimentation with a code to live by. The military can surely do that, offer a direct line to get your shit together. He may go back to war one day, but not to fight. He says he hates guns. He’s a self proclaimed Republican, but doesn’t support their moral platform. He believes in social reform, but doesn’t believe in greater taxation. Like I said, he’s a paradox. But regardless of what he stands for, he signed the contract to straighten out his life, and now he has to go to Texas. He needs to go for training.